19 There was a certain rich man, which was clothed in purple and fine linen, and fared sumptuously every day:

20 And there was a certain beggar named Lazarus, which was laid at his gate, full of sores,

21 And desiring to be fed with the crumbs which fell from the rich man’s table: moreover the dogs came and licked his sores.

22 And it came to pass, that the beggar died, and was carried by the angels into Abraham’s bosom: the rich man also died, and was buried;

Notice that when Lazarus died he was carried by angels straight into Abraham’s bosom. That little piece of news has deep spiritual implications. It means, first, that Lazarus had the same faith that Abraham had. Secondly, it translates to the fact that, ultimately, Lazarus shared in Abraham’s spiritual promise.

But Lazarus must have paid a heavy price for his faith, and this is the essence of this post. His physical condition must have been the butt of his neighbors’ jokes. I actually give this rich man credit for allowing Lazarus to be laid at his gate. But, obviously, he would not allow himself to interact further with such a lowly species.

But, as he sat at his neighbor’s beautifully-emblazoned gate waiting for the crumbs, Lazarus must have shared his message of salvation to anyone who cared to listen. He preached! The rich man’s words in verse 27 indicate he was aware that Lazarus could deliver a message. He must have heard him share often of the hope that he had in him.

But I can imagine people shaking their heads as they passed by and saying to Lazarus, “If you have a God, where is He? How can you be in such a condition and claim to have this all-powerful God?”

They would have told him, “Look, man; you have a wonderful message, but we don’t see much of this great God you talk about!”

And Lazarus probably would have tried to explain to them that God is not found in outward conditions but in the things that have to do with our hearts. But people look on the outside. Few would have paid any attention to him. As far as they were concerned, he was not representative of an all-powerful God.

People of the world cannot see into God’s spiritual Kingdom. They cannot discern the deep inner work of the Holy Spirit in a man’s heart, a work accomplished through suffering. Unfortunately, this worldly spirit has also crept into the church. God’s people no longer see in the Spirit. They look on the outside. They see God only in blessings. You will hear people say, “So-and-So is so blessed! He just bought a new car.”

Well, we thank God for cars for they can take you from point A to B much quicker than walking on foot or riding on a bicycle. But cars are hardly the blessing that God promised Abraham. When you die, the fact that you owned a car will not usher you into Abraham’s bosom.

In most churches today, if someone is poor, or if they are suffering in one way or another, it is automatically translated that they do not have faith. And yet, it is in this very crucible of suffering that God works on us to perfect us! Sometimes God will even allow a sickness to stick with us just so He can work in us through it.

And so, in the midst of his very difficult situation, Lazarus kept his faith. As people jeered and wondered aloud where his God was, Lazarus allowed God to perfect His work in him. He kept his faith.

As children of God, we cannot allow outside circumstances to dictate to us. We must keep our eyes on Jesus, who also suffered in the flesh. Jesus suffered in His flesh, but He kept His faith. He is our example. We must be ready to identify our lives with His, by the power of the Holy Spirit in us.

[Below: On some routes in Tanzania, “bora ufike” (just as long as you arrive) is the key word. In this photo, to the left, in a space reserved for only one passenger, four more are crammed in. The lady on the near right side is seated directly on my lap] 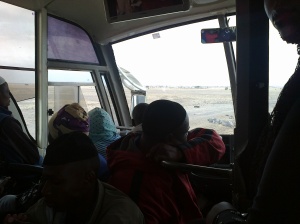